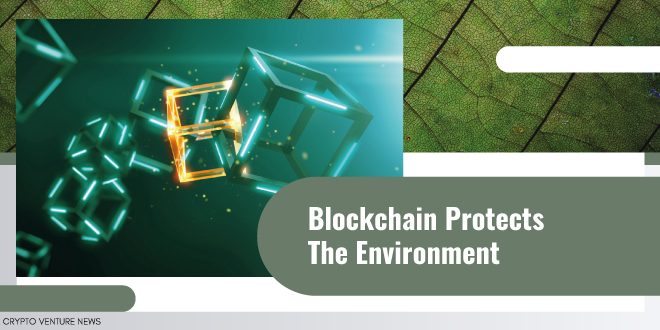 Here Are The Ways How Blockchain Protects The Environment Easily

The blockchain is the shared database technology that defines Ethereum and Bitcoin, and it is ready to disrupt several industries in the future. It is already being used in payment and banking, but most people do not understand that the same technology can be used to solve environmental issues. On this World Environment Day, let us have a look at how blockchain protects the environment.

The blockchain technology is adopted across the globe, it can also help to reverse the change in the climate. As tamper-proof, permanent databases that are shared by a community without any centralized owner, blockchains are specifically interesting for the environmental causes. We have all heard about the blockchain and bitcoin harms the environment, but what are the ways in which blockchain protects the environment? This article will help you to find that.

5 Ways By Which Blockchain Protects The Environment

Platforms such as Ethereum enables users to formulate programs, or decentralized apps (dApps) that operate on the blockchain and have a variety of uses – not just financial functions. The programs are implemented automatically, and precisely as agreed upon by all users. Public blockchains are basically transparent, implying that high quality data is accessible to anyone and is consistent throughout the network.

The first thing that comes to our mind when we think about the ways in which blockchain protects the environment, we need to mention about supply chain management. Most people wish to purchase items that are made ethically, but that kind of data is often unavailable and hard to verify. The item goes via many hands prior to it attaining the store. It is very convenient for entities to lie nearly how their products are created, what chemicals and materials they use, where they throw their garbage, or how fairly they treat their employees.

Blockchains can be employed to track items from the manufacturer to the shelf and help safeguard inefficiency, waste, fraud, and unethical practices by enabling supply chains more transparent. They can also help users be better informed of how every product was created and shipped so they can make more environmentally friendly selections.

With the present recycling programs, people often do not have proper incentives to take part. The responsibility for operating recycling programs often falls on every separate city, which results in several places not having a recycling schedule at all. It is also hard to compare and track the effect of these programs.

A recycling venture on the blockchain could boost participation by offering a financial reward in the type of a cryptographic token in exchange for depositing recyclables such as cans, plastic containers, or bottles. Similar setups already prevail in various places across the globe, in general in Northern Europe.

Traditional power grids are wholly centralized, which can formulate inefficiencies in energy distribution, such as having an unused surplus. And in sections of the globe impacted by natural poverty or disasters, power outages can leave people without access to electricity.

A peer-to-peer blockchain that is dependent on the energy system would decrease the requirement to transmit electricity over long distances, which can impact losses along the way. It would also help decrease the requirement for energy storage, as such trading can shift electricity locally from where it is being produced in excess to where it is required. So there is a huge blockchain impact on environment.

It can be hard to track the original impact of environmental treaties, and at times there is no incentive for corporations or governments to keep their promises. Manipulation and fraud of data are also issues in this area. But if you talk about the ways in which blockchain protects the environment, this application cannot be ignored.

Blockchain could discourage governments and corporations from back-pedaling on their environmental promises or even misreporting their progress, as the technology would enable them to transparently track crucial environmental data, and narrate whether commitments were met. Once the data is put into the public blockchain, it remains there forever.

Trailing the carbon footprint of every item using the blockchain would safeguard this data from tampering, and it can be utilized to evaluate the portion of a carbon tax to be charged on at the matter of the sale. If an item with a large carbon footprint is more expensive to purchase, this would encourage purchasers to purchase items that are more eco-friendly, and would therefore encourage entities to restructure their supply chains to cater to the demand for such items.